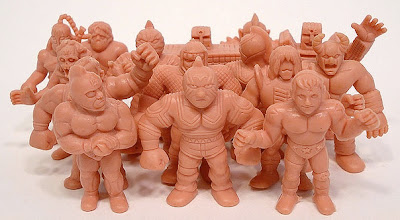 Here's a silly idea I came up with while browsing some 80's retro toy sites the other day. Collecting comics was my main addiction back then but I occasionally got sucked into fads, and one was the line of M.U.S.C.L.E. figures put out by Mattel. It was an American version of Kinkeshi from Japan. They were really strange looking little PVC figures and they still have a pretty size-able fanbase. How cool would it be to have a setting based on the Mutant Future rules where you had a bucket full of M.U.S.C.L.E. miniatures then pulled a random character out. The Mutant Lord would assign stats and mutations based on what the figure looked like. It would be a fun way to run one off adventures as a break from a regular campaign. The only problem is that they haven't made them in ages and collecting a bunch of them would probably be pricey.
Posted by Gavin at 8:33 PM

A Site For Mutant Future Related Ideas And Musings

Gavin
I came, I saw, I did some stuff.